To be on top of my eating carb-free and sugar-free eating, I know I can’t rely on my whimsical eating patterns. Can I pause for a second and express that making all this food in advance may appear cool and put-together but kind of sucks? I am used to being fast and easy with my food, so this is annoying. But whatever, I am meal prepping and planning for the week, it is happening.

I have to think about appeasing my husband for some of these meals, which is a challenge because he has a sweet tooth and loves red meat and carbs. Red meat in moderation is cool, but if I learned anything from my nutritionist, it is that the fat content in red meat is too high for consistent consumption. Instead I am looking for chicken recipes that might help him forget he isn’t eating red meat. It’s a dream! I dare to go after it! 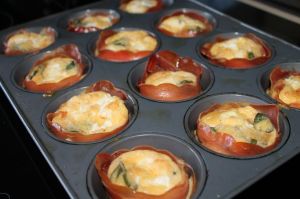 So here is my plan for the week: I am working a lot of early mornings, this 4 days starting at 5am. So I need something that will be protein filled, tasty and have veggies in there as well. I am going to make prosciutto wrapped egg cups. I found a recipe at Nom Nom Paleo but I am going to tweak it because I am not Paleo. These suckers are going to have more egg whites in them, peppers, mushrooms and onion. And I am going to top them with some lower fat cheese.

Lunches are going to be a tuna casserole that doesn’t have any pasta in it. So is it more like a tuna bake? I don’t know. It’s going to be broccoli, cauliflower, tuna, canned soup and a bit of seasoning & cheese. I thinking of giving it a punch and adding dill. Dill and tuna are amazing together! I found the recipe on Spark People.

For dinners, I am doing to variants because I know Robert and I will need variety. I am making my favorite pizza spaghetti pie from PaleOMG and then I am making another recipe from that site called honey sesame wings. Only I am going to use chicken breast, not wings.

Since I open at SB tomorrow, some of the cooking will have to happen today. So now I need to get my ass off the couch, get to a grocery store and get the day started.

One thought on “Meal Planning”