I didn’t love the taste of the crust in this recipe but others might enjoy this, so I am going to post it. Plus I took some impressive pictures of the process, and you know how I am an attention whore, so any excuse to post them, am I right? Thanks to The Healthy Foodie for the recipe!

In my honest opinion, the crust is too dry and I like my pizza with cheeses, so once I am done with the Whole30 I might re-try this and add some cheese to the crust, as well as the top. You know, as long as the dairy experiment this week doesn’t destroy my body. Anyhoo, I am side-tracking.

Microwaved cauliflower, on the dish towel!

2 tbsp of nutritional yeast {this sucker was hard to find, I got it at Whole Foods} 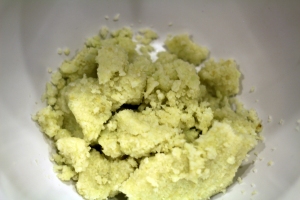 Dried cauliflower in the bowl, ready to go.

First, you want to pre-heat the oven to 475F and put a pizza stone or baking sheet in the oven while you prep the crust. I am assuming that helped cook the crust from underneath, but the recipe never explain why. This is my educated guess.

Put the grated cauliflower in a microwave safe bowl and cover loosely.  Microwave for roughly 4 minutes. The recipe calls for you to put the cooked cauliflower in a fine mesh sieve, but since I don’t own one {or know what that is} I went to plan B–I put the cauliflower onto a clean tea towel, let it cool for a few minutes then wrapped it up, as they described it: “like you would a candy and squeeze the heck out of it by wringing the towel.” Done.

“Make me into a ball of dough!” ~cauliflower

Next you want to add the cauliflower into a bowl, and then dump the rest of the ingredients in there so they are happy together. Mix until it forms a dough-like substance. The grab a piece of parchment paper and put the dough on it. The recipe calls you to put the parchment paper on a cutting board, to make it easier to transfer to the baking sheet, but I am a rebel and I didn’t do it. Anyhoo, form the cauli-dough into a ball, then flatten it down gently with your fingers and form it into a flat disc that is roughly 8 to 10 inches in diameter. The thinner the crust, the better. Mine was too thick.

Once the “dough” is pressed down to a thickness you can live with, use the cutting board {or your own abilities} to slide the crust onto the hot pizza stone or baking sheet. Bake for 8 – 11 minutes, until it starts to turn golden brown. Remove at this point. Decorate. Put it back into the oven for another 7-10 minutes and voila! A pizza is ready for eating! Enjoy 🙂 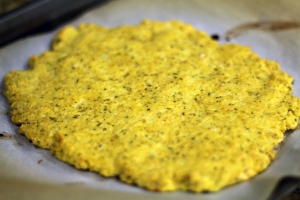 I would press this into a thinner crust.