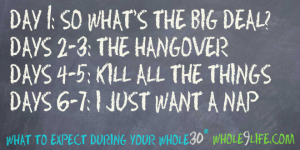 First day Whole 30. I think I did super well!! Especially considering I might hae stayed up later than I should have playing Cards Against Humanity.

I woke up at 6:15am because I wanted to be able to arm up and sit at the table to eat my first meal. It is a big thing in the program that you sit at a table and take in what you eat. No TV. No sitting on a couch. So I got up, got dressed, prepped my food for lunch and then warmed up my first meal of prosciutto-wrapped frittata’s and water. They were YUMMY.

At about 10am I started to feel hungry. Which probably means I needed to eat more at breakfast. Notes taken. During this time a funny incident happened, I was in my bosses office and she has this jar…that she usually keeps mints in. Well. She breaks out a box of mint chocolate Andes. HOLY SHIT. Then she opens it and pours all that chocolate into the jar that is right beside me. I was staring at her as she was pouring them in the jar and I kept thinking “Is this really happening?? Am I being tested this early in?” I tried to not react, to pretend like something major was happening but my insides were just shocked. I did not touch the candy at all.

At 11:30am I was ready to kill an animal and eating it raw on the floor, so I knew it was time for lunch. I had good conversation with my co-workers Kevin and Barbara. I had my beef-stuffed pepper and cauli-mash. I enjoyed it a lot but felt the beef was a bit too dry. Need to make is saucier next time, maybe more tomato paste?

This meal was great and got me through to my pre-workout snack which was half a scotch egg. 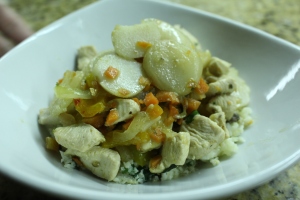 Dinner was amazing. I made a stir fry and it was tasty, tasty, tasty! I threw in a pan onion, garlic, mushrooms, yellow and orange bell pepper, water chestnuts, chicken and fish sauce. It smelled ok but kind of fishy, which scared me. Then inspiration hit–cilantro! I threw that in there and voila! A delightful smelling {and tasting} stir fry! I also fried up some cauli-rice with onion, garlic and cilantro. It was an epic dinner. I am still satisfied from it, and it’s been 2 hours.

Tomorrow I am told I will be getting detoxed and thus will have a headache and be cranky. I can only imagine what tomorrow will bring!

For your viewing pleasure, gratuitous pictures of my meals below! 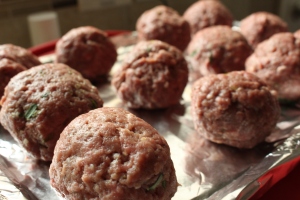 Scotch eggs going in the oven!

Scotch eggs, out of the oven, looking delish! 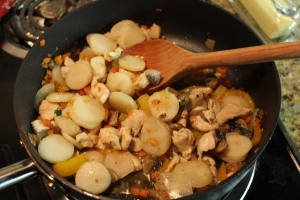