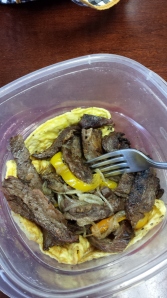 This week I tried something new—I ordered 100% paleo food from this woman in my area who is creating her own food prep business. Her story is similar to those around me, once over-weight, now on her path to being healthy. She also does crossfit and has her own amazingly hilarious blog that I love to pieces!

I was nervous—I was spending a good chunk of our grocery money this week on completely paleo food—what if I hated it?? What if it had ingredients in it I didn’t like? I was a flutter of emotion, but I said “What the hell, let’s do this”, and I ordered a few meals. It also didn’t hurt that her description made the food sound crazy amazing, so I knew I was going to buy them regardless of how nervous they made me.

The first two items were for breakfast and the rest I had as my lunch.

The only meal that was a “miss” was the waffles! I microwaved the meal and it tasted soggy and “off”, but the bacon that went with it was delish. And eating the bacon with the waffle in the same bite was great. So lesson: toast the waffle. I am sure it will taste better and not soggy.

Major hit: fajita tacos! The “taco” part was made of egg and the seasoned fajita meat was deliciously tender and seasoned. It also had onions and bell pepper. It was so so so good. I hope she makes more of this for the future, cause I will buy 5. Seriously. That good. Another hit was the beef stuffed pepper. The beef was seasoned and it tasted great with the pepper. I also put the broccoli in with it and it was all-around tasty!

Yummy: Shepard’s pie. The cauliflower mash was good but I have had potato with my shepard’s pie for years, so it was an adjustment. Not a bad one, just different!! Also, I wasn’t entirely full at the end of that meal, so I should have had something else to go with it. Another yum were the baked goods. I was super nervous about these. I love my sweets and I wasn’t sure how these would taste not being made from flour. Well screw flour!! These tasted great, just the right amount of sweet. I didn’t feel deprived.

Overall? Worth the money! Save for one meal, I was 100% satisfied! I plan to order from her for the foreseeable future, as I like having variety in my meals and this has this plus taste plus being good for you. And I don’t have to cook as much and I get to sleep in longer? Win fucking win!!!