This recipe was the winner of the week! It took quite a bit of prep, so if you are looking for something easy to make you might want to skip this. But if you do, you suck, cause this recipe is so tasty your mouth is going to thank you!! So put on your big girl panties, do some prep and get excited!! This recipe also requires a slow cooker and is brought to you by Nom Nom Paleo.

4 celery stalks (I used more, since I love my veggies)

Lots of cutting ahead! So cut the shallots and the garlic–I was lazy and had pre-cut garlic on-hand so I used that instead. Garlic is garlic. It was fresh, not dried. Don’t try to cheat the recipe with dried garlic, it’s not the same. Won’t give it the same sultry taste. Cut the celery stalks into 1-inch pieces. If you are using the big carrots, peel them (ugh, so time consuming!) and cut them into edible-sized chunks. Next: more cutting! Yay! Grab your beef and cut it into 1 1/1 inch cubes (mine were slightly large as my husband sous chef desired that). Season the beef with the salt and pepper and then rub that seasoning into the meat. The herbs I used are from Canada, so if you live anywhere else, I apologize, you are out of luck, you have to order through a consultant. 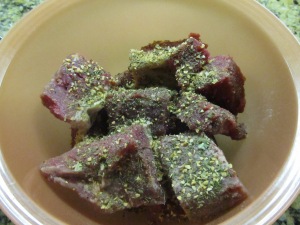 Get out a frying pan and heat the coconut oil. Toss in the onion, garlic and celery, toss in the salt and pepper and saute until the shallots are translucent. Then add the tomato paste and cook for another minute. Then add the chicken stock and use it as a way to get all the goodies into your slow cooker. 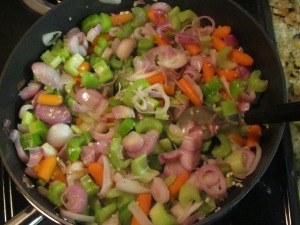 Now. Here is where the recipe and real life clashed. I found the amount of liquid for this recipe to be off. Way off. So here is what I did and it turned out great. I used the entire can of tomato paste. It’s a thickening agent, and I needed more stock to cover the meat, as it’s about to be cooked for 10 hours. So the amount of stock that went in was more around the 2 cup mark. I eyeballed it. I know, I know, how can you replicate an eyeballed amount?? Fear NOT. After putting the meat into the slow cooker, put stock in until it reaches the meat but doesn’t cover it. The meat will get smaller as it cooks. so the choice is up to you, follow the recipe as written above, or do what I did. Either way, it’s going to taste awesome. Next add the fish sauce, tomatoes and carrots. Cover and cook for 9 to 11 hours. I cooked mine for 10 hours and the meat just fell apart when I was dishing it out. The smell was like heaven! 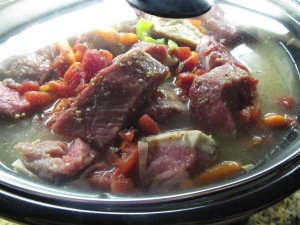 (you can see how high  put the chicken stock)

When ready to serve, saute the mushrooms with the coconut oil and season with salt and pepper. When tender, add to the stew and stir. You can also add the apple juice at this time if your heart desires. Now put some stew in a bowl, top with parsley and eat it! You will lose your mind!! Enjoy!!! 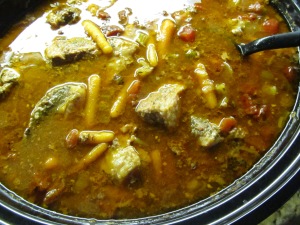 (you can see how awesome it looks cooked!) 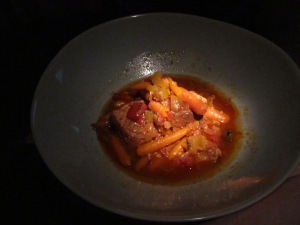 (would you believe that the power went out again?? But flashlight presentation rocks!)