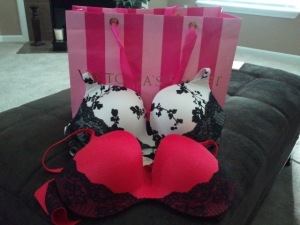 Today was a day off, which is so rare and glorious for me. I decided that I needed to treat myself for all the hard work I have been doing, and I knew that it wasn’t going to come in the form of food. Instead I got a manicure (which I need for work) but then I decided a nice treat would be to buy a new piece of clothing for myself. So I went to Victoria’s Secret, as my bra’s from Lane Bryant are becoming too big. These bra’s are the smallest ones I can get from Lane Bryant, so I knew the next step was dun dun dun to be bought at a regular sized clothing store. I also have incredibly sensitive skin, so having a bra with padding around the underwire is imperative. The woman I approached recommended the “Incredible” bra–it has a gel-encased underwire, so that it won’t rub too harshly against my skin. It also has specific straps that don’t slip off the shoulders, which is something that happens with my current bra all the time. When I tried a few on, I found I was a 38D and that I liked the push-up bra the most. So I bought 2! One that is white with black lace and a pink one with black sparkly lace. Oh yeaaaah, they are hot!!

Next I went to Macy’s. I was feeling good! I was into a regular sized bra for reals, and I knew this meant I could most probably fit into regular sized tops. So I picked up a few shirts in XL and tried them on–they fit. They were a tad snug on my hips, but that has always been the norm. Unfortunately I did not find a shirt I liked, but for once it was not because of my size, it was because of the fact that I didn’t like them. One was too droopy. Another had a weird bunching at the shoulders, but I almost bought it. Another had weird bunching at my neck. Another just wasn’t my style. But it was still a win! I am officially into regular sized shirts, which means I can start shopping at clothing stores I never have been able to. So now I am doing the typical Christine thing and over-thinking where I want to go shopping. What is my style? I have always been limited by my size to what my style is. So now there is a new world opening up to me. If anyone has places they love to shop and would like to share, I am open to them!