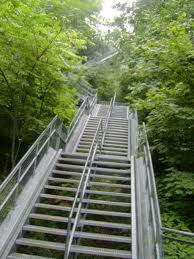 Jerrad, Brandon and I had been circling each other to go climb these stairs in Hamilton. We finally did it Thursday night and wow!! One–the stairs were not as tall and trecherous as I imagined in my head. This is good because I had been psyching myself out (Jerrad wasn’t a big help either, by trying to scare me). Two–it made me realize that even though I have been working out consistently since January, I am not in crazy great shape!! About halfway the first time up I had to stop and catch my breath, and I wasn’t even trying to go quickly on these stairs! Three–I did the stairs three times, and although at first I was like “I only did it three times, sad face”, when I went to work the next day everyone else said “You did them three times…your FIRST time?? Wow!”. Apparently people die after the first or second time up their first time. So even though I felt like I should have done more, in actuality I did well. And that has inspired me to, obviously, go back! I want to see if I can do more!

I am hoping to go either tomorrow or Monday, depending. I don’t know how to get there (I wasn’t paying attention so much!) but I hope that either Jerrad or Brandon want to do them with me again. I know I am much below their fitness level, but it’s the fun that counts 🙂

As a P.S. the muscles in my calves are so sore and tight it’s insane trying to climb any stairs at the moment!! LoL